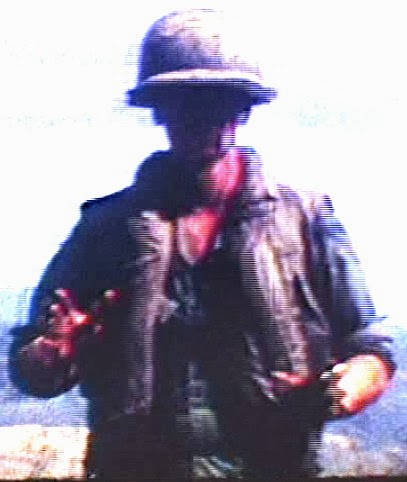 WWHHEEWW! BAROOOM!…The dirt around them blew into the air. Skull crushers! Jimmie was right. Out there meant dying.
Ears aching—”Goddamn it, Jimmie, I can’t hear you...hear a goddamn thing!”
WWHHEEWW! BAROOOM!--Brain scramble. Can’t swallow. Messed up. Jesus, we’re all going to die!
Rye picked his head up, looked out into the explosions--An image raced toward him. A flash reflected off Gun Six’s silver barrel.
He was screaming above the noise, “The blast...look into it...there!”
An angry, frightened voice shrieked, “Ain’t somebody goin’ ta do something?”
Explosions were ripping their guts out. Metal shards flew at them, slicing at everything.
The guy's right. No one fighting back, they’d all die.
It was coming down to him, HIM, AND ONLY HIM—Do something, or we’ll all be dead!
My life! My time is up!—He gulped in air, sprang off the ground, ran out into the explosions, toward that image of the silver barrel, screaming back at his men. “Gun Six, get the motherfuckers, NOW!”
Got to find the gun—He hit metal, jammed his right leg against a gun trail. Goddamn made it to Gun Six!
Get up on the trail—Out of his mind, gulping for air, he leaped onto the left trail, climbed toward the barrel.
Find the scope—He needed to aim the gun with the scope mounted on the gun frame.
Locate the flash—There...muzzle flashes…one…two…from the other side of that mountain to the west.
Not caring now…whatever lands on top of me, gonna put it out!
Aim to it—Banged his right eye against the eyepiece. Hurts! Keeping his left eye free.
Pick up the flashes--There…two more…”Goddamn, again from behind that mountain!"
Swing the barrel—He frantically wheeled the gun barrel right--Sighted, flashes in the scope.
Incoming! Another freight train. No time to duck--Shrapnel careened off the barrel, flew by his head.
“Goddamn it!” He barely recognized his own voice compressed by the explosion. His nostrils burned. He was choking in the nitrogen-infused air.
His ears useless.
Saw movement…men around him--They’d followed!
He saw through the explosions--Gun’s breach is open.
He hollered “WP, charge seven!” They’d fire max charge, burn the fucking mountain with phosphorous.
WHOMPF! The breech slammed shut.
A muffled voice called out--“Ready, Rye!” It was Jimmie.
Rye screamed, “Goddamn it, fire, Jimmie!’“

ABOUT THE NEW NOVEL